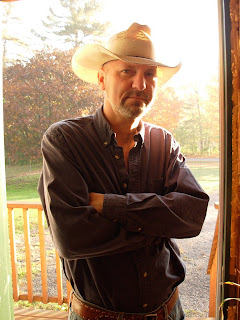 Born in Vancouver. Had no idea what I wanted to be or do in my life. Tried technical school to become a skilled draftsman but couldn’t handle the math. Worked for a bowling alley chain as a manager for 6 years. During that time got married. When the marriage crumbled, quit the bowling biz and went to SFU where I spent 5 years getting a major in English and minors in Philosophy and Theatre. Upon graduation, went to work at a hotel doing front desk work and then maintenance. All through this wrote poems/fiction and wrote/performed/directed plays in various alternative spaces. Followed a woman to Toronto and spent 8 months getting an MA English from York University. Remarried. Worked for two years with an environmental group (Pollution Probe) going door to door and then managing a crew. Started a theatre company in Toronto – Bald Ego Theatre – and did several Fringe shows as well as a full length play at theatre Passe Muraille in the back space. Closest I’ve ever been to having my work done in a legitimate venue. Another divorce. A few books came out with a few different publishers. Began working with the Standardized Patient Program at the University of Toronto, first portraying roles, then giving feedback to students and doctors, then training roles, then educating in terms of communication skills, which I am still doing.

My fifteenth book and third novel – As Good As Dead – set to come out Oct 23 with Pedlar Press. My work has also appeared in numerous magazines and anthologies.

Here are partial responses (since there are never answers) to your questions:

I had never written a poem before I went to SFUniversity (age 27) and a certain prof said I should try as it would help to tighten and focus my prose. Next semester, I chose to put together a series of poems based on shadows as an elective. Having completed it, I shipped it off to publishers with no success, so decided to self-publish.

I went to the university print shop and the woman running the place refused to print the ms saying that one of the poems was sexist and exhibited violence against women. I was surprised that she had taken the time to read the book and more surprised that she had the power to censor. Apparently, she had done this more than once and no one questioned her. It was the late ‘70s and left-leaning feminism was running hot. In fact, she was very much regarded as one tough-assed dyke, and better not to get in her way. I tried, and failed miserably.

On the recommendation of a female friend, I went to another print shop (also feminist and run by a collective of lesbians) where they took on the project, no questions asked. I don’t know if they read the material or not.

In a bizarre twist of fate, the woman who ran the SFU print shop was killed one year later in a motorcycle accident.

My next book of poems (Sweet Betsy From Pike) was published about ten years later by Wolsak and Wynn, after I had moved to Toronto. Having received the ms, I was invited to the back garden for coffee and cakes to discuss the book. It was a bit Alice in Wonderland. I was quizzed by Maria Jacobs and Heather Cadsby for a couple of hours about the themes and so on. I went home, and, a few days later got a letter of acceptance in the mail that said: “Congratulations, you’ve managed to penetrate the chink in the armor.”

Which pretty much sums up the publishing biz so far as I’m concerned and changed my life in that I realized it took more than putting words down on paper to guarantee a book contract – it required the precise alignment of stars and position of planets, a certain amount of luck and some sense of the dramatic. In other words, there appeared to be much more to getting a book published than in actually writing the damned thing.

Nineteen years in Toronto and still enjoying it. The only thing about geography that affects my writing is that I’m very much an urban writer, whether here or in Vancouver, and changing names of places could place my work in many major cities. Race or gender doesn’t play a big part in that most of my prose is the dynamic of one character to another at a basic love/don’t love level: change colour, exchange male/female for male/male, female/female, whatever.

I’m more often working on a larger piece from the beginning, whether it’s a collection of poems, stories, a novel or a play. I generally have a theme or a story line, maybe an acquired folder of images; an outline.

4- Are public readings part of or counter to your creative process?

I enjoy doing public readings, though they are accompanied by the usual fear and nervousness. Part of the reason I took up acting in the early days was to help me better perform my work in front of an audience.

5- Do you have any theoretical concerns behind your writing? What kinds of questions are you trying to answer with your work? What do you even think the current questions are?

6- Do you find the process of working with an outside editor difficult or essential (or both)?

The editorial process has generally been a positive experience for me. No one seems to concern themselves too much with poetry, so it hasn’t really been an issue, except maybe to cut a few poems. Prose is longer, hence, there’s more to hone in on and I’m pretty open to making changes so long as the changes make sense to me. With small presses, they really don’t have the time or money to choose material that needs a lot of editing. It might be different if a large press decided to publish something.

Harder. The main problem is that my books don’t sell. I haven’t established a viable consumer base, so hard for folks to take a chance on me. And no major awards and no one teaching my work in schools.

Dare I eat a pear? Yes! Two days ago, along with a peach. A very brave morning indeed.

Don’t go to bed with anyone crazier than yourself. Of course, I’ve never been able to follow that advice, personally. Also: don’t just talk about it, do it.

10 - How easy has it been for you to move between genres (poetry to non-fiction)? What do you see as the appeal?

Very easy. The appeal is simple: variety is the spice of life, and so on. Also, I find that different genres offer different outlooks, challenges and require a different set of tools. Though, there are indeed many folks who write in any or every genre and manage to have it all look and sound the same and I’m unsure as to what the point is there.

I don’t have a routine. What I tend to do is block out time and then sit to work on whatever project. The project is generally self-driven, though sometimes it’s because I’ve received a grant or had a request. Sometimes I simply say: I will have such and such a project complete by New Year’s come hell or high water. I do like to work in the daytime as opposed to the night. At night, I’d rather be drinking a glass of wine or watching a video or eating a nice dinner with Jacquie than writing.

I rarely get stalled once I’m underway, though I will seek inspiration by having favourite books around me and flipping pages on and off.

Gawd – the thing about books is that they are usually written years ago and are only now finally published. My life has changed, I’m working on another project and so on. I was able to do some re-writes for my latest novel of course to make it a bit more au courant, but I was still pretty happy with it. I’m usually just happy to see it in its final book form with lovely cover and typeset and then a launch and maybe flaunt it at a few readings before things move back to obscurity.

I’m pretty much a Freudian in terms of psychology so much of my work is driven by sex or the lack thereof. Saying this, I’m also very Picasso-esque in that willing to beg, borrow and steal from anywhere. There’s a nice quote that says if you invite Picasso to dinner, rest assured that your silverware is safe, but keep an eye on your wallpaper. He was noted for stealing bits of wallpaper from people’s walls. My first book of poems based on shadows, my next on environmental issues, my next on art works, my next on science, my next on male identity in the new age, my next on Chaos theory…

There is a long list and I can’t do this justice. First, I tend toward more European or south American writers – Kafka, Pinter, Cortazar, Borges, then American – DeLillo, Shepard, Spicer, Kerouac, then Canadian – Watson, Gibson, Fitzgerald. Just read Anne Stone’s new novel Delible and quite enjoyed it. Have been enjoying your work for several years. Movies and movie makers are important – Woody Allen, Fellini, well you know, the artzy types.

I’d like one of my books to win the Stephen Leacock award for humour so that folks would know that my work is funny. Also would like to have a play done on a mainstage where I didn’t have to direct it as well.

Writing is not a career for me, it’s a pastime. The problem is, I’ve gotten used to doing it and it’s fun and I’ve basically painted myself into a corner and can’t escape.

Too lazy and get too bored for other things.

Want to finish a short story collection that’s a bit magic realist and a poetry collection with poems dedicated to folks who have influenced either me or my work, which sort of ties in with the above questions.