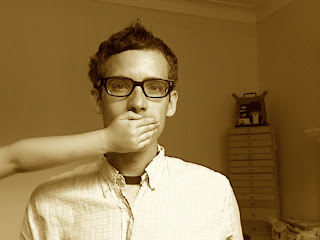 Ian Roy was born in Ottawa, Ontario, Canada in 1970. His first book, The Longest Winter was a collaboration with Julie Doiron. That book was published in 1999. Ian’s next book, People Leaving, was short-listed for both the Upper Canada Writers’ Craft Award and the City of Ottawa Book Award when it came out in 2003. Red Bird, Ian’s third book, is a collection of poems published by BuschekBooks in 2007.

I guess it didn’t.

I will answer this loaded question in 3 parts.

Part One: I was born in Ottawa, but left the city (and the province) within days of my birth. The details regarding this move are murky. Not a lot is known about this time in my life. Family records suggest I was whisked away to a remote village in rural Quebec, where I was eventually schooled. So to speak. My passport from this period, however, tells a very different story.

Part Two: I write a lot about leaving places behind, moving from one place to another. Geography, then, becomes blurred: like watching the landscape pass by from the window of a car or train. That’s how I see geography impacting my work: here it comes, there it goes.

Part Three: Race? Gender? These things definitely have an impact on my work. It would be impossible not to let that happen. However, that said, it is a subtle impact, and not something I often address directly, but rather more obliquely. That’s just me: what with being white and male and straight and right-handed and slim and all that…

A poem or story, for me, often begins with an image: either something I actually see or just something I remember or imagine: but an image. For example, I once saw a man dressed from head to toe in denim. Next thing I know, I’ve written a story containing just such a man. Amazing.

And, oh, from very early on, I do conceive of the work as a book. That’s what keeps me going.

As I answer these questions, I am hours away from doing a reading at the I.V. Lounge in Toronto. I used to love doing readings; lately, it’s a chore. The book I’m reading from, or ‘promoting’, if you will, is a collection of poems (Red Bird). I think I just hate giving poetry readings. I’d much rather be a stand-up comic. So, to answer your question: public readings run counter to my creative process.

Essentially difficult. But still essential. I’ve been lucky, actually, and the press that put out my last two books (BuschekBooks) is excellent and is run by excellent people. It has been a very good experience.

Two days ago. Sliced. I don’t eat the seeds like some people I know. Why do you ask?

9 - How easy has it been for you to move between genres (poetry to fiction)? What do you see as the appeal?

I’ve been writing both poetry and fiction from the beginning. I don’t see one as more appealing than the other. But it’s the subject that determines what I’m going to write. So, I just follow along, like an over-determined school-boy.

I have two children. So, there is no typical day. I write when I can: usually this means I write after I’ve put the kids to bed and cleaned up. Of course, they go to bed at four o’clock in the afternoon.

Music. Film. Art. Books. I also ride my bike around to think and get “juiced,” if you’ll allow the phrase.

Well, the new one, Red Bird, is poetry and the last one, People Leaving, is short fiction. The one before that, The Longest Winter, was, um, I don’t know what you’d call it. But it was something else altogether.

Despite the superficial differences, however, I visit and revisit a lot of the same, happy themes and subject matter in all of my work: dead animals, loss, leaving, the end of things. I like to look on the bright side of life.

I believe David McFadden to be absolutely right. But I also believe that books comes from everywhere and everything: it is hard not to be influenced by every little thing, in some small way. So, from books, for sure. I love books; I write books because of all the books I have loved.

I’m also very lucky to have friends who make art: and they, or more precisely, their work influences me in many ways. For example, music (Snailhouse), visual art (Jon Claytor), writing (Rita Donovan), film (Andrea Dorfman), to name but a few.

(I mostly did that to see how you’d hyperlink all of those, rob. Because you are amazing at that.)
14 - What would you like to do that you haven't yet done?

Make a living at this.

I really have no idea. And I’m not trying to be a smart aleck here.

See above. For both points.

The last great film I saw: Away From Her. It blew me away in the subtlest of ways. Beautiful.

I’m currently working on another book. Also working on videos for the Chapter Project at www.ianroy.ca/chapter_project.html and planning to make a short film in the spring/summer.
12 or 20 questions archive
Posted by rob mclennan at 8:00 AM

He would be my teacher for Story Telling Theory at Algonquin College. I'm going to show this to my Story telling theory class, see what they think. Very interesting.