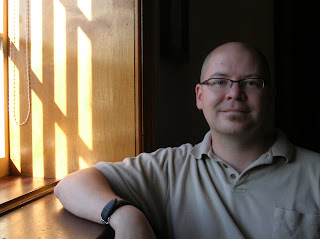 bio: Born in Saint John, NB, in the early spring of 1971. I think it was overcast and cold that day, but my memory isn’t great. Like a lot of people in the Maritimes, my family moved to Alberta in 1977; we stayed there until 1983, when we moved to Ontario. Weirdly, I repeated that motion for university and beyond: back to Fredericton for master’s degree, then to Edmonton for doctorate, then to Toronto for a job (finally!). I’ve been an associate professor of poetry and poetics at York University for just over a year now.

Random facts:
Married with no kids, but with two illegitimate cats.

An Aries, which means nothing to me, but perhaps that defines me on some unknown level to people who understand the motions of the spheres.

My first book, were the bees, was published by NeWest Press in 2005 and was nominated for an Alberta Book Award.

Sex, drugs, and rock ‘n roll—my first book convinced me that poetry would bring me none of those. It made me feel more legitimate as a writer in some ways, and it was nice to be able to show relatives what I do. But I don’t think it changed my life.

I’ve been in Toronto just over a year. I don’t think geography directly impacts my work, though it does affect my day-to-day life, just like everyone else. I think social geography plays a much bigger role in my writing—who I’m talking to about poetry and ideas, who I’m listening to at readings, etc. All of those things are determined to a large degree by where I live.

Race and gender are often in the back of my mind, because I’m constantly made aware of certain privileges that go with hand in hand in Canadian society with being white and having a penis. I can walk alone at night in places where my wife can’t; I walk into a classroom and students seem to grant me more authority than they do some other instructors. Completely undeservedly. I don’t think race and gender are major aspects on my writing, but I try to make sure that those undeserved privileges don’t creep in as ideological blind spots.

It changes. I used to write only lyric poems, and I still write some discreet poems, which usually come from encountering or thinking of some interesting line, or metaphor, or idea. But more and more I’m writing pieces that directly come out of an interaction with a specific text or prompt. I’m a little embarrassed at times by personal lyrics (my own and sometimes other writers’); why should I expect anyone to care about my pronouncements on anything?

This change has made me more interested in longer projects. Not necessarily book-length projects, but pieces that often run 20-30 pages.

I love giving readings, but I don’t think they’re really part of or counter to my creative process. I generally don’t read a poem until I’m pretty satisfied with it. Every once in awhile I’ll discover a problem with rhythm or sound when I’m reading a poem, so I guess readings can act as an occasion of intense attention to minutiae, which is useful for craft. But I’ll work to fix any problems that I find later, on my own.

I’ve also developed over the last few years an interest in anarchy as a political and social practice. I think that there’s a way that anarchy can help us remove the restrictions placed on language in order to help create those new language patterns. Lots of other poets have had similar concerns, especially Robert Duncan and John Cage, but I think the language writers do similar things as well.

6 - Do you find the process of working with an outside editor difficult oressential (or both)?

I haven’t had a lot of experience working with an editor for a press (Doug Barbour, my editor for were the bees, is very hands-off in a good way). But I do have a group of friends that I pass things to for their thoughts and suggestions, and I think that’s essential to my writing. I often won’t agree with a suggestion, but even so, that makes me really think about things that I might have overlooked before. And Kelly, my wife, is my first reader and best editor for everything I write. I know she’ll be blunt, and I trust her to be brutal when necessary.

I ate a pear just a few days ago while watching some bad tv show; it was mushy and awesome (the pear, I mean... but also probably the tv show). But the question piques my curiosity: why ask about pears? Are pears inherently poetic? Did Roy Kiyooka know something about pears that the rest of the poetry community doesn’t?

Keep your stick on the ice.

I only write poetry and academic papers. Writing fiction baffles me (and besides, people just make it up). Way back when, I had to take a screenwriting class as part of my degree at UNB, and that class just about killed me. The prof (Bill Gaston, prince among men) was merciful and realized that I worked very, very hard on that lousy, lousy screenplay.

I haven’t figured out how to be creative in my academic work, so my essays tend to be a bit stuffy. I’d love to write essays like Fred Wah does, but I can’t. Not yet, at least.

I usually write when I find the time, which is probably also a reason I’ve tended to write in response to prompts or other texts.

A typical day usually involves breakfast, checking my e-mail and reading Silliman’s blog, prepping classes and/or teaching classes, lunch, more of the same, and pleasure reading (usually poetry) on my hour-long commute to and from York. Evenings are usually for hanging with my peeps, as the kids these days don’t say. Whatever free time I can carve out in a day I try to spend writing and editing.

I generally turn to a prompt or a text and write from that. For example, I recently finished a serial poem in which I took the first and last lines from each page of Herbert Asbury’s The Gangs of New York, wrote down those all those lines as couplets, and then removed words until some weird sense emerged. I’ve used base texts in that way a fair amount, really, because I’m dubious of notions of inspiration and personal voice.

Mostly I’m influenced directly by other books (though influenced might not be the right word for the interaction between a writer and a base text). I have to be careful not to write poetry about visual art anymore, because that’s a prompt that I’ve used a lot in the past and want to avoid (or at least keep to a minimum). I’ve lived in big cities for the past 10 years now, so any experience I have with nature—usually instances of nature inside the city—often makes its way into a poem (I have lots of references to songbirds, raccoons, skunks, bats, etc.).

If I had to choose a favourite poet, it would probably be Robert Duncan, but John Cage, Robert Kroetsch, Jan Zwicky, Erin Mouré, the language writers, and lots of others are important to me. I’m still fascinated by Pound, Stein, Williams, too.

Learn to swim. My squat little body sinks like a stone.

If my marks in high school science classes had been better, I probably would have been a veterinarian. Years ago, a friend asked me why I wanted to be a vet and not a doctor. Easy. Because I actually like animals.

After my problems with high school sciences, I thought I’d become a visual artist, a painter. I had some natural ability, my teachers told me, and it was fun. But I could never think of anything interesting to paint. So I switched to writing because I love playing with words. If I couldn’t write, I’d probably like to try to paint.

On Adam Dickinson’s recommendation, I read Juliana Spahr’s This Connection of Everyone with Lungs (U of California P, 2005). Terrific stuff.

I love films that most people consider to be... what’s the word... bad. I loved Pan’s Labyrinth, but so did everyone else, right? Less people share my undying love of Ishtar.

I don’t watch a lot of live theatre, but I recently saw Evil Dead: The Musical and loved every second. It made me appreciate the subtleties of the movies even more.

I’m pulling together the final draft of a manuscript that should be my second book, fingers crossed. I’m also slowly writing two other poetry manuscripts. One is a series of experimental reworkings of a number of Shakespeare’s sonnets, the other is a book-length (or possibly longer) series of poems in a sort of post-language writing style that take the idea of glass and texts about glass as a prompt. The only rule with that last poem is that the word glass can’t appear.