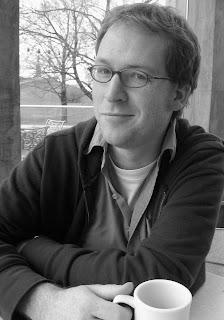 Rob Winger grew up in a tiny Ontario town, and has since lived in eastern Canada and Asia. His work has been published in literary journals across the country, and selections from his first poetry collection, Muybridge’s Horse (Nightwood Editions, 2007), won first prize for poetry in English in the 2003 CBC Literary Awards judged by P.K. Page, Dionne Brand and George Bowering. Currently at work at a doctoral degree in English and cultural studies, Winger lives with his family in Ottawa, Ontario, where he skates to work each winter. He is also an associate editor of Ottawa's Arc poetry magazine.

1 - How did your first book change your life?
Well, my first book’s only been out since May, and my life really hasn’t really changed much since then, though getting it published has finally allowed me to put my thoughts on Eadweard Muybridge to rest, thank God. Have been carrying him around for years now!

2 - How long have you lived in Ottawa, and how does geography, if at all, impact on your writing? Does race or gender make any impact on your work?
I’ve been here for about four years, and was here for another year back around 2000. Location, gender, race – all these categories impact everything that everyone writes, I think, though I wouldn’t say that any of them have taken over as my main mode of or reason for writing, despite my hopes that what I’m doing is ethically informed. Probably geography has the most direct impact, whether I know it or not – I keep on writing landscape poems even though I hate almost all of them!

3 - Where does a poem usually begin for you? Are you an author of short pieces that end up combining into a larger project, or are you working on a "book" from the very beginning?
Neither and both. It depends on what the project is. Usually, I have no idea what I’m doing until I start, and then the form of the project takes shape and I can work with it as I go. At other times, I have a specific idea, problem, form, whatever in mind when I start, and use that as a limit out of and against which to write. For the Muybridge poems, for example, the historical record was my form and my limit – how I wrote through and against it was one of the main challenges of the book.

4 - Are public readings part of or counter to your creative process?
Neither, really. Except if the reader is particularly moving. A few of the things George Bowering said at his reading with you in Ottawa last year have stuck, for example, and I find myself thinking them through, and having his seemingly casual poetics influence how I think about new work. I often find the interviews and the Q & A’s more interesting than the actual readings, since I tend to work through poems slowly, with breaks, with space to think, and hearing them all in one go tends to confuse me (I have the same problem understanding if someone spells something aloud!). IF, however, you mean GIVING readings, that’s something I really quite like. Being forced to consider my own work, and to practice it aloud is a real privilege, especially since it makes me immediately critical and curious about the things I’ve done – two elements easier to achieve in the shared space of a reading than in the solitary space of writing.

5 - Do you find the process of working with an outside editor difficult or essential (or both)?
Both. But, this is such a broad question I’m not sure how to answer it. If the reader/editor has a good ear and tells the truth and wants to get the same things out of a poem as I do, it’s almost always essential.

6 - When was the last time you ate a pear?
Today, for lunch. Ontario-grown. Juicy.

7 - What is the best piece of advice you've heard (not necessarily given to you directly)?
“Keep your stick on the ice.”

8 - How easy has it been for you to move between genres (poetry to non-fiction)? What do you see as the appeal?
In most respects, I think these kind of divisions aren’t very useful. Seems to me that there’s really only two kinds of writing: good and bad. Who cares what kind of label might be imposed upon it? And I think most poetry is non-fiction, really, but gets categorized on how heavily the poem draws on scenario, narrative, self-proclaimed experiment, prose, etc. So, I don’t worry too much that everything I used to write ended up being a first-person, narrative-driven, lyric poem because I also work on other kinds of writing. As bpNichol once said, you only really need to get worried if you get stuck in your own form, only if your form doesn’t evolve. That’s true, I think.

9 - What kind of writing routine do you tend to keep, or do you even have one? How does a typical day (for you) begin?
I’m not sure I HAVE a writing routine, except when I set aside a week or two to concentrate on a particular project that’s built up some momentum, or seems to need attention just then. I remember a few concentrated weeks like this – one on Koh Tao in southern Thailand, another at the office here in Ottawa, another earlier one on the train heading west… Otherwise, my days normally begin with a call from my four-year-old son to get up and play. After blocks and breakfast, I go to work, buy the groceries, and hopefully ideas take on relationships somewhere in the process.

10 - When your writing gets stalled, where do you turn or return for (for lack of a better word) inspiration?
I don’t particularly espouse any kind of set poetic ideology, but my own writing practice HAS grown out of (and against) that old, Wordsworthian notion of recollecting moving moments in tranquility. I don’t generally buy into this kind of poet-as-uber-legislator stuff, but it does seem true that an impulse to write comes on all of a sudden for me, and that if I don’t follow it I get pretty grouchy. But, if I do follow those impulses, it allows the essential work of editing and intentional shaping to open up the piece to a whole different set of methodologies… So, I suppose that the best answer to this kind of stalling is time and space. I think I spend less time actively seeking out a way to write than letting ideas steep, slowly shifting and relating to each other, and eventually taking on meaning and resolution. I remember a calculus teacher once telling our class that mathematical problems also work this way, that if you just let the formula and variables haunt your daily routines for a while, you’ll sit bolt upright in bed one night and suddenly know the right way to use the numbers.

11 - David W. McFadden once said that books come from books, but are there any other forms that influence your work, whether nature, music, science or visual art?
Oh, sure. All of these things, and the lives and scenes and ideas that were the seeds for them to get made into art in the first place. Remember last year when you read with George Bowering and he said that, for him, reading and writing were the same process, involved the same kind of creative energies? I think that’s true, if the writing’s good, and the two tend to feed off of one another. The same is true, for me, for great music or art or landscapes or whatever. So, I suppose I think that READING good writing is really the best teacher and catalyst for writing. I remember showing some early, terrible poems to one of my English professors way back when, and his response stuck: “well”, he said, diplomatically, choosing words carefully, “ I think what you really need to do is go out and read more poetry”. Was he right!

12 - What would you like to do that you haven't yet done?
Finish my damned doctoral dissertation!

13 - If you could pick any other occupation to attempt, what would it be? Or, alternately, what do you think you would have ended up doing had you not been a writer?
I’d be the foreman of a crate factory or a failed, minor-league left winger.

14 - What made you write, as opposed to doing something else?
Well, when I applied to university I was too lazy to put together a portfolio of drawings in order to apply for a studio art program. I guess that would be my pivotal moment of personal artistic history. It was easier to apply for English.

15 - What was the last great book you read? What was the last great film?
I’ve spent the last couple of years reading a bunch of classic Canadian longpoems, so it’s tough to name just one. That being said, I’ve recently re-re-read Phyllis Webb’s Naked Poems, and it’s just beyond praise. That one and a little chapbook by bpNichol called “You Too, Nicky” are the ones that stick out most recently. The last film that had a similar effect for me, for different reasons, was the first James Bond film, “Dr. No”. Please tell me you’ve seen it…

16 - What are you currently working on?
One thing I’m thinking about is how to assemble a poetic miscellany that uses the important subjects commonly invoked in them without resorting to clichés or predictable, naïve treatments of complex ideas. Another is teaching my son Davis to play catch a baseball; he already hits better than I do...
12 or 20 questions archive
Posted by rob mclennan at 1:57 PM