12 or 20 questions: with Pattie McCarthy 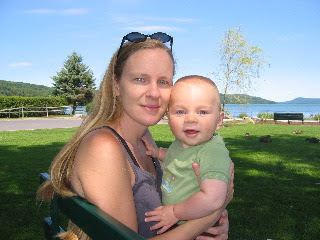 Pattie McCarthy is the author of bk of (h)rs (2002) and Verso (2004), both from Apogee Press. She did an M.A. in Creative Writing—Poetry at Temple University. She has taught literature and creative writing at Queens College—CUNY, Loyola College in Maryland, Towson University, the University of the Arts and Temple University. She lives in Philadelpia with her husband, Kevin Varrone, and their 9 month old son, Emmett.

When bk of (h)rs was published, I felt supported. I felt like someone took me seriously. No small thing, that. & I found the book—as an object—very pleasing. I didn’t think I would ever have such a good idea again (this fear hangs around still).

I grew up (from the age of 3 until I left for college at 18) in the Philadelphia suburbs. I lived in Philadelphia again from 1996 - 98 while at Temple for the M.A. Then we moved back to Philly in 2004. Geography— meaning here the physical features of Philadelphia— is very important to my work if only because this is a very walkable city, and I spend an awful lot of time walking it. Walking is a kind of thinking toward writing. Also, there are so many poets who are important to me here— Chris & Jenn McCreary, Frank Sherlock, CA Conrad, Sarah Dowling, Jena Osman, Rachel Blau DuPlessis, Ron Silliman, hassen, Tom Devaney— I should also add Kevin Varrone (since we’re married, I’d hope we’d live in the same city regardless). The poetry community here is fabulous & of great value to me. Also, I find Philadelphia to be quite beautiful. Though I was born in Baltimore— a city I have now left 3 times for Philly— I am truly from Philadelphia.

I confess that I am always working on a book from the beginning. This makes throwing something out very painful— because the project gets very big & then I realize it’s terrible. Since my son was born 9 months ago, the chunks of writing I get done at any one sitting have gotten much smaller. I suppose it is going to take me much longer this time to finish the book (& I think I was a very slow writer before). I thought I might work on shorter pieces after he was born, but I immediately started thinking about how to make those shorter chunks into a larger project. There is a great deal of research involved in my writing process, & the research structure of a book— or sometimes even just an area of research I have been wanting to do— usually takes shape very early in the writing.

Readings I attend (not those I give) are important because I am addicted to books & I think I need to hear poetry more often. Readings that I give— ? I don’t know how to answer this question. I never write anything new for a reading, but I do revise & rework poems for readings. Readings are often quite instructive when I realize I would be embarrassed or anxious or lukewarm about reading a particular poem or section in public.

I am trying to answers questions about history, about sources, about dictionaries, about etymology, about the use & disuse of words. There are theoretical & practical concerns— lately the practical are more pressing.

I show my work to Kevin first. & then usually I show it to Jenn McCreary & Barbara Cole. Their ideas & opinions & questions are important— if they have time to comment in that way. Perhaps I have internalized their voices & they— along with Rachel Blau DuPlessis, from whom I learned so much— form a little imaginary chorus I hear in my head as I edit, trying to imagine what they would think or say or advise. It is nice & good to get the work in front of other eyes, for me, whether or not this results in some kind of editorial commentary.

I can’t say. In fact, I couldn’t swear that I have eaten a pear ever.

“I’m going to tell you something Frances Jaffer told me, just before my daughter
arrived: ‘It’s going to seem like you’ll never think another thought. But you will.’”

I think they are all lying.

I used to write in the morning— coffee, cigarettes, lovely. The day typically begins for me around 5:00 or so, nursing Emmett. He determines the day’s schedule, really. There is no set time for writing. Kevin & I are going to try setting aside Fridays (when neither of us teach) for writing & other like work, dividing the day in half. I confess : I miss cigarettes.

I re-read Susan Howe’s The Europe of Trusts. Or I read some history. My current manuscript had stalled (this is years ago, 2001 maybe, I’ve been working on this one for ages) & I came across the book Wonders and the Order of Nature by Lorraine Daston & Katharine Park in St Mark’s Bookshop. I’d been writing a piece called wonder. Very lucky. Or another lucky time— I was flailing around, looking for an organization principle for a manuscript (this is right around when Verso was published) & I came across a facsimile of Robert Cawdrey’s 1604 dictionary A Table Alphabetical of Hard Usual English Words. I found it in the library at Towson University, where I was teaching at the time. I don’t know what I was looking for originally. Suddenly the dictionary as a guide to organization made perfect sense— & I stole his title, abridged.

Verso was looser than bk of (h)rs. More expansive. I missed the narrow focus of bk, but in the end I think Verso is more even because of its broader range. Someone said that Verso is more “personal.”

During the semester, I don’t get to read much ‘for pleasure.’ Fortunately, as the writers named above demonstrate, I am fortunate to be able to teach writers whose work interests me & is important to me. Since it is currently during-the-semester, this is the only way I can answer this question.

In relation to writing ? I’d like to write a place-specific series in Prague or Warsaw. This has been kicking around my head for a while. This means I have to go there, bonus.

I thought for a long time that I would be a lawyer. The study of law appeals to me— the practice of it, not so much. Besides, my brother is a lawyer & so the family is covered in that respect— clearly we needed a poet.

I love teaching & wouldn’t want to do anything else. I feel particularly devoted to Temple & my students there. I am currently an adjunct, which is not a long-term workable system. So I guess I am going to have to think about what other occupation I would like to attempt. I used to want to be a libranian too— but I’ve heard that job market is as tough as the academic market. No sense trading one madness for another that’s much the same.

The short— but a bit too cute— answer is that I have always written— I have no memory of not thinking about myself as a writer, even when I was a little kid. Clearly, though, this isn’t a reason to do anything. When I realized I didn’t want to study law (this was, say, my first year of college) I decided to do the other thing I thought I was good at— so here we are. Seriously, though, my teachers at Towson (where I did undergrad) were amazing— Clarinda Harriss, Edwin Duncan, just to name two— & I wanted to write & I wanted to do what they did, be a really great teacher.

Lisa Robertson’s The Weather, which I just read last year. Cole Swensen’s The Glass Age. Vollmann’s Europe Central. I haven’t been to the movies in a long time. I haven’t even watched a movie at home in a long time— with the baby, movies seem like a big commitment. But I have watched tv shows on dvd & would like to propose Deadwood & The Wire as my last great films.

This might be redundant, but I’ll quote a recent jobletter-type thing I had to write:

My current manuscript, Table Alphabetical of Hard Words (which takes its title from the 1604 dictionary by Robert Cawdrey, often called the first English dictionary) is a book-length poem sequence which continues my interest in etymology and history, but has a much wider historical scope and a greater focus on the contemporary and urban landscape than my previous books. I am particularly interested in how language changes through use, disuse, amelioration and pejoration.

More specifically, I have been working on the ‘k’ section (kopernik, a reading of On the Revolutions of the Heavenly Spheres) & the ‘s’ section (spaltklang, which is a kind of sonnet sequence— the squareness of the sonnet has really appealed to me lately, has seemed approachable to me— I am thinking about a square of 14 square sonnets, the baby has a starring role in this sequence).

I wrote this all in one sitting, which is a kind of miracle. Thank you.