12 or 20 questions: with William Allegrezza 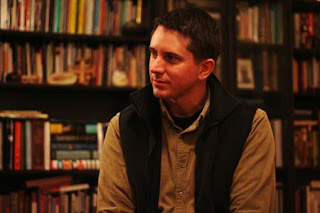 William Allegrezza edits the e-zine Moria and the press Cracked Slab Books. He has published four books, In the Weaver's Valley, Ladders in July, Fragile Replacements, and Covering Over; one anthology, The City Visible: Chicago Poetry for the New Century ; seven chapbooks, including Sonoluminescence (co-written with Simone Muench) and Filament Sense (Ypolita Press); and many poetry reviews, articles, and poems. He curates series A, a reading series in Chicago dedicated to experimental writing. In addition, he occasionally posts his thoughts at http://allegrezza.blogspot.com.

My first book did not change my life much, for by the time it was published, I had been editing Moria for several years. Beginning Moria had a more profound impact on my life; it pulled me into an active literary discussion/world. When my first book came out, it seemed like just another piece of that discussion. In fact, later works, like Fragile Replacements, have felt more significant to me, and they are perhaps read by more people.

I recently moved from Chicago to Kalamazoo, Michigan—it’s a temporary place for me since I’ll be moving again this summer. I was in Chicago for seven years, and the city was important to my development as a writer. In Chicago I came to know many wonderful poets like Ray Bianchi, Simone Muench, Garin Cycholl, Kristy Odelius, and Chris Glomski. Reading their works and getting to know them pushed me to write and explore new ways of writing.

The geography of the city also influenced my writing. For six of the years I was in the city, I spent part of the summers crewing on racing boats. The experience of sailing on Lake Michigan has filtered into many of my collections since.

As far as race and gender, I’m sure that both impact my work, but I do not consciously focus on them.

I don’t have any set way of beginning. I write as much as I can, and occasionally the writing seems to work. If I think it works, I keep it. That’s probably how most of the writing I’ve done gets started. Often I find that I’m concerned with several themes and theories at one time, so the writing I do will often address those ideas.

As far as working on a book, usually I do not, but I have on three major occasions. The first was the chapbook temporal nomads. In that work, I knew that I wanted to write poems for one month dealing with my reaction to the works of Deleuze and Guattari. The second time was with In the Weaver’s Valley. Again I used a time constraint to guide my writing. I wrote five poems a day for fifty days. The last instance was with the first long poem of Fragile Replacements. I wrote a poem for each section of Dante’s Vita Nuova. In that long poem, I was meditating on the loss of a relationship and how one moves past the loss.

Beyond these instances, I usually just write and see what I come up with in the process.

They are part of the process only in that I realize I will probably do them. I’m not an especially good reader, and I often feel compelled to read the most assessable works.

I more often write with a reader in mind than an audience at a reading.

I have many theoretical concerns behind my poetry. The critical texts of the language poets have especially influenced my work, as has Postmodern thought including writers like Deleuze and Guattari, Foucault, Benjamin, Adorno, and Virilio. The Black Mountain Poets also are very important to my writing.

Lately, I have been looking for ways to rethink the lyric. Basically, I’ve been trying to reconfigure the lyric for the contemporary mind while retaining some non-commercialized individual presence in the poem. Trying to write new thought constellations has long been important to my process.

Most of the time, editors do not touch my poetry, so they do not seem difficult to me. The few suggestions that I have received from editors have been very helpful. For example, Eileen Tabios (of Meritage Press) told me with Fragile Replacements that she thought it needed a long section at the end to balance the book, and she was correct. When I finished the long poem for the end of the book, it helped.

In most ways, easier. I know what to expect now, and I understand the pace of my writing. I also have a lot of design experience. Looking for new directions is the main hard part now. When I look back over the innovative writing of the past hundred years, I find it difficult find new avenues for exploration. I’m not suggesting that is my main goal, but if I’ve seen someone else do something well, I don’t often try to repeat it.

About two months ago. I was standing above the sink in my kitchen. The lights were off.

Jen Karmin told me once that she believes that writing poetry is a karmic activity, that you receive back much of the energy you expend. Considering my experience, I think she’s right. When I try to help other poets in a generous and open way, I receive help in spreading my own work.

I write whenever I have a spare moment, and if I do not find a spare moment during the day, I write at night. Often when I’m working on the final stages of a project, I do little else but scribble notes and play with the pieces. I become so focused that I shut out everything else to work.

11 - Where is your favorite place to write?

My desk at home in front of a large window. That said, I write anywhere I can, and some of my best poems have been written on trains or at tables at conferences.

Sometimes collaboration with other poets, sometimes Dante, sometime I just turn inward and try to write my way through to a new idea.

Fragile Replacements feels less playful to me formally. The work in it seems easy to access. My older works are more opaque and multi-referential. In this one, I was hoping to go in a new direction, but I’m not convinced I’ll write more works quite like this one.

I came to poetry from music. Initially as a teenager, I started writing song lyrics for a band that I was in, and I eventually became more interested in the words than the music. Since then, music has remained an influence on my work.

As far as nature, I do not consider myself a nature poet, but I love being in the open air. I have long been a hiker and backpacker, and one of the great benefits of my current residence is that my porch looks out over a nature preserve. I hike in it whenever I have time. Images of nature, thus, filter into my poetry.

The list of important writers for me is long and includes writers like Whitman, Neruda, Sappho, Bernstein, Ungaretti, Montale, Dante, Hejinian, Huidobro, Levertov, Eliot, Pound, H.D., Duncan, Olson, Vallejo, Porta, and Howe (this list could go on). I think of my writing as engaging in a conversation with the writing of other writers.

I would like to work on collaborations with other artists, especially painters and dancers.

Some type of researcher or preservationist.

I felt and still feel compelled to write.

I’m rereading Homer’s Odyssey currently to teach it. Besides that, Noah Eli Gordon’s [see his 12 or 20 questions here] Novel Pictorial Noise was quite good.