12 or 20 questions: with Steve McOrmond 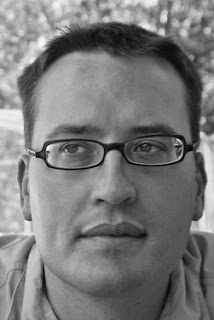 Steve McOrmond was born in Nova Scotia, grew up on Prince Edward Island, and now makes his home in Toronto. His first book of poetry, Lean Days (Wolsak and Wynn 2004), was shortlisted for the 2005 Gerald Lampert Award. His second collection, Primer on the Hereafter, also published by Wolsak and Wynn, was awarded the 2007 Atlantic Poetry Prize. While studying creative writing at UNB, he worked on the editorial board of The Fiddlehead and co-founded the literary journal Qwerty. His work also appears in the anthology Breathing Fire 2: Canada’s New Poets.

For a number of years prior to my first book, it seemed terribly important to get published. An analogy might be the anxiety one feels at a certain age about losing one’s virginity. Perhaps the change, having experienced the gone-in-sixty-seconds anticlimax of first publication, is that I no longer feel that kind of intense, paralyzing anxiety, or not nearly so often anyway. When I do feel it now, there’s a line by Glenn Gould that I try to keep in mind: “The purpose of art is not the release of a momentary ejection of adrenaline but is, rather, the gradual, lifelong construction of a state of wonder and serenity.”

I’ve lived in Toronto for ten years now, though I still feel a bit like a tourist in the city. Often I just stand and gawk, overwhelmed by how exhilarating, alien, terrible and sublime this place is. Writing, like accounting, is often historical. I’m still working through stuff from my childhood and early adulthood in the Maritimes, and still writing out of that landscape a good deal of the time. So, while the city and its geography and social fabric have definitely influenced my work on a number of levels (subject matter, style, structure), it may be too soon to gauge the full impact.

I write poems, not books of poems. My approach is piecemeal. Any kind of organization comes only once a fair number of poems have been written. It’s usually only a later stage that I begin to see certain connections between poems and realize that I may have a larger project on my hands. As to where the poems originate, I might say that, while some poets write out of ideas, I often seem to be more concerned with people and places. My work is peopled by many different voices or characters, some real, some imagined, whom I’ve felt compelled to evoke and memorialize. Likewise, it’s important to me to capture a specific time and place as best I can. Already, some of the places I’ve written about have ceased to exist (been bulldozed and redeveloped etc.) so there’s an elegiac or archival impulse: to look back, to record, to remember.
4 - Are public readings part of or counter to your creative process?

I enjoy public readings both as reader and listener, though I do wonder whether readings haven’t taken on an exaggerated importance in our culture. I’m wary of how easy it is to judge a writer based on their ability to perform when this has little or no bearing on the quality of their work. I’ve lost count of how many times I’ve purchased a book at a reading, after having been struck by the personal charisma of the writer at the mic, only to be disappointed by their work. Likewise, there are superb writers who are just terrible readers, and sometimes terrible human beings as well. In an interview in Jacket, C.D. Wright says, “I no sooner decide I am forever committed to someone’s work than I see them in the flesh in a setting I can’t erase and which forever galls my reading.” Because I’ve had similar experiences with writers whom I admire, I prefer to encounter them on the page where my experience of their work is unmediated by their public face.

Ecological thought informs some of my poems. The current question might be the one posed by Tim Lilburn and the Thinking and Singing Poets: “How to live in the world as if it were home” or more simply, “How to be here.” I’m very interested in notions of place and how place shapes one’s identify and vice versa – Milton Acorn’s figure in the landscape making the landscape. This preoccupation with place is something you find in a great many Maritime writers. Sometimes it manifests itself as pastoral: a looking back and a longing to return to the garden. It’s interesting to read John Thompson’s Stilt Jack and David Hickey’s In The Lights of a Midnight Plow with an ear for how these poets veer toward and away from the pastoral tradition.

More essential than difficult. I’m of the era where workshopping one’s writing is pretty much the norm, so wrestling with an editor holds little apprehension. I’ve always had a small group a peers and mentors with whom I’ve shared my writing either through workshops and correspondence. These fellow writers have been among the most thorough readers, toughest editors and fiercest critics of my work. With friends like these…. Sometimes I do daydream about what it might be like to work with an outside editor in the truest sense, an editor whose aesthetic lies well outside my comfort zone. How might my poetry benefit if Erin Moure, for instance, were to pop the hood and start tinkering with the engine? (Erin, if you’re listening…)

7 - After having published a couple of titles over the years, do you find the process of book-making harder or easier?

Harder, because your ambitions for what you hope to achieve in your work become more grandiose. It’s no longer sufficient simply to make a poem (in itself, no small feat), but you want to push your work in new directions and make the great poem.

A couple of months back. Sliced pears drizzled in maple wine from Nova Scotia’s Gaspereau Vineyards for dessert. God, my mouth is watering.

“Instead of advancing, we too ought to try and rise.”
– Serge Fauchereau

I like to work in the mornings. I try to get up early – around 7 a.m. – and write until about one in the afternoon or so, though sometimes I’ll get caught up in something and will still be at the keyboard when my wife gets home at 5 or 6 p.m.

I’ve written very little over the past year, so I wish I knew where to turn or return. The old stimulants – reading John Ashbery and Wallace Stevens, listening to Glenn Gould, getting out and walking around – seem to have lost some of their potency.

I suppose the rhetoric is a little more assured in Primer on the Hereafter than in my first collection, or so I’ve been told. I am more conscious of wanting my recent unpublished work to be different from what’s come before. My work naturally tends towards the lyric-narrative and I’ve been trying to push against this tendency a bit.

All of the above. Whatever gets caught in the sweep-net of my consciousness makes its way into the poetry eventually: Scientific American, Nick Cave, Peter Mansbridge, snatches of conversation overheard on the subway. You name it.

Ted Hughes, John Ashbery, Alden Nowlan, John Thompson, Don McKay, Stephen Dobyns, Louise Glück, Margaret Avison, Robert Hass, Mary Oliver, James Wright, John Berrryman and Tomas Tranströmer have all been tremendously important to me at different times in my life, and I return to these writers over and over again. In a sense, they are survey markers that help define the circumference of my poetic practice. More recently, I’ve been obsessing over Ron Silliman, Rae Armantrout, Michael Palmer, James Schuyler, Jack Gilbert and C.D. Wright. It feels important to my craft to try and figure out what makes these poets tick.

Travel to Scotland to see where my mother and her family came from.

No idea. If I did know, would I still be attempting it?

The last great film is easy: The Coen Brothers’ No Country for Old Men. I’m a huge Cormac McCarthy fan and this adaptation of his novel is haunting and sublime. As for books, you’ll have to settle for a shortlist:

Ok, let’s move on before I change my mind.

I’m knee-deep in a collection of poems about the end of the world called The Good News About Armageddon. I hope I have time to finish it before the subject overtakes its scribe. The title poem, which alludes to a Seventh Day Adventist pamphlet hand-delivered to the door, is a long sequence of poems loosely informed by the North American ghazal tradition. The voice of this poem is mercurial—by turns bitter, querulous, self-reflexive, dejected, ecstatic, profane, prophetic, aphoristic, hectoring. The collection also includes a number of dramatic monologues.