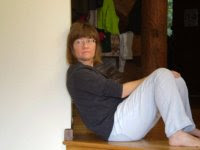 Susan M. Schultz is a poet, critic, and publisher who lives in Kane`ohe, Hawai`i on the island of O`ahu. She is author of Aleatory Allegories (Salt, 2000), Memory Cards and Adoption Papers (Potes & Poets, 2001), And Then Something Happened (Salt, 2004), and the forthcoming book, Dementia Blog (Singing Horse, 2008). She edited The Tribe of John: Ashbery and Contemporary Poetry (Alabama, 1995), and wrote A Poetics of Impasse in Modern and Contemporary American Poetry (Alabama, 2005). She edits Tinfish Press and teaches at the University of Hawai`i-Manoa.