12 or 20 questions: with Victor Coleman 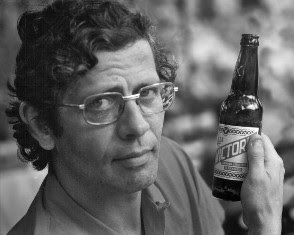 Victor Coleman was born in 1944 in Toronto. His first real job was as the late Ken Thomson’s mailroom clerk. He then went on to work for the Toronto Star (where the night editors mocked him for reading Joyce and Olson), and at Oxford University Press (a virtual apprenticeship in book design and the business of publishing), before jumping ship to become linotype operator for The Coach House Printing Co. and Coach House Press editor in chief (from 1966-1975). He was also once co-owner of The Bohemian Embassy, programmer for Queen’s University’s National Film Theatre, Executive Director of A Space, publicist/programmer for The Music Gallery, and editor of The Blue Book for Community Information Toronto. Since 1999 he has been the chief editorial mucky-muck for the Centre for Contemporary Canadian Art’s Canadian Art Database (http://www.ccca.ca/). Before the unions made it impossible for practicing writers with no degrees to do so, he taught CanLit and Creative Writing for the Toronto District School Board and at York and Queens Universities. He has received grants from the Canada Council and the Ontario Arts Council, and in 2001 was given the Harbourfront International Writers’ Festival Prize. In 1996, when the Coach House Press had been run into the ground by various committees, he and Stan Bevington started up Coach House Books and http://www.chbooks.com/, the world’s first simultaneous print and online publishing venture. Ultimately there was nothing in it for him. Meanwhile Bevington’s on his third Porsche. Over the years he has broken bread, smoked dope and otherwise hung out with such significant contemporaries as bpNichol, Milton Acorn, Gwendolyn MacEwen, Raymond Souster, Artie Gold, Gerry Gilbert, George Bowering, Robert Creeley, Charles Olson, Robert Duncan, Edward Dorn, joel oppenheimer, Paul Blackburn, Robert Kelly, Allen Ginsberg, Gregory Corso, William S. Burroughs, Lawrence Ferlinghetti, Philip Whalen, John Wieners, Jonathan Williams, Diane di Prima, Anne Waldman, Ted Berrigan, Basil Bunting, Barbara Guest, and Robin Blaser. His five children have produced seven grandchildren. He likes to summer in Rieux-Minervois, near Carcassonne in the southwest wine region of France.

1 - How did your first book change your life?
I was able to present a copy to Glenn Gould at a salon where I read the work.
2 - How long have you lived in Toronto, and how does geography, if at all, impact on your writing? Does race or gender make any impact on your work?
That’s two questions.
3 - Where does a poem usually begin for you? Are you an author of short pieces that end up combining into a larger project, or are you working on a "book" from the very beginning?
Book.
4 - Are public readings part of or counter to your creative process?
I’m semi-retired and only read in bars where poets seldom go.
5 - Do you have any theoretical concerns behind your writing? What kinds of questions are you trying to answer with your work? What do you even think the current questions are?
That’s three questions.
6 - Do you find the process of working with an outside editor difficult or essential (or both)?
Difficult is essential.
7 - After having published more than a couple of titles over the years, do you find the process of book-making harder or easier?
The making is easy, it’s what happens after that’s hard.
8 - When was the last time you ate a pear?
That’s two questions.
9 - What is the best piece of advice you've heard (not necessarily given to you directly)?
Never answer questionnaires.
10 - How easy has it been for you to move between genres (poetry to critical work)? What do you see as the appeal?
None.
11 - What kind of writing routine do you tend to keep, or do you even have one? How does a typical day (for you) begin?
Breakfast, coffee.
12 - When your writing gets stalled, where do you turn or return for (for lack of a better word) inspiration?
Underarms. (Sorry, I thought you said perspiration.)
13 - How does your most recent book compare to your previous work? How does it feel different?
ICON TACT wraps up the conventional verse, the rest is Oulipo.
14 - David W. McFadden once said that books come from books, but are there any other forms that influence your work, whether nature, music, science or visual art?
Who’s David W. McFadden?
15 - What other writers or writings are important for your work, or simply your life outside of your work?
Michael Boughn, the Mickey Spillane of Language poetry.
16 - What would you like to do that you haven't yet done?
Die.
17 - If you could pick any other occupation to attempt, what would it be? Or, alternately, what do you think you would have ended up doing had you not been a writer?
Trapeze artist.
18 - What made you write, as opposed to doing something else?
Couldn’t play the piano.
19 - What was the last great book you read? What was the last great film?
That’s two questions.
20 - What are you currently working on?
My obituary.
12 or 20 questions archive
Posted by rob mclennan at 11:04 AM

Well thanks for sharing this post. The questions are really good. You shared a great biography of victor Coleman. He is simply awesome because at one place he is executive Director of A Space, publicist/programmer for The Music Gallery, and on the other place editor of The Blue Book for Community Information Toronto.