12 or 20 questions: with Christopher Doda 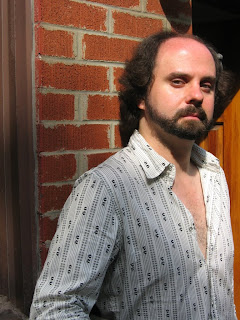 Christopher Doda lives in Toronto. He is the author of two collections of poetry, Among Ruins (2001) and Aesthetics Lesson (2007), both from the Mansfield Press. He is also an editor at Exile: The Literary Quarterly and Exile Editions. In addition he is the book review editor for an online poetry journal, Studio. His reviews have appeared in Arc and Books in Canada among others. Currently he works in the Information and Privacy Office at York University.

As for music, I listen to a great deal from rock and metal to industrial to classical (Niccolo Paganini and Megadeth’s Dave Mustaine have more in common than might be obvious). Many years ago, as a teenager, I played the drums, which I think had an impact on the way that I write poetry in that I’ve always paid attention to the rhythm of language as much as content. Both are essential in the creation of meaning.

When it comes to science, let’s just say I didn’t win that award in high school. Some of the theoretical problems around physics are fascinating but the math completely eludes me.
14 - What other writers or writings are important for your work, or simply your life outside of your work?
As for poets, the list would be extensive (I sometimes feel like I’m jogging behind a small of army of very talented people). TS Eliot and WH Auden immediately spring to mind. As do WB Yeats, John Donne, Czeslaw Milosz, HD (Hilda Doolittle), Charles Baudelaire, Rainer Maria Rilke, Gwendolyn MacEwen, Johann Wolfgang von Goethe, Tomas Transtromer, George Faludy, Miroslav Holub, Wallace Stevens, among others. I’ve recently discovered Nissim Ezekiel, whom I’m enjoying a great deal. As for novels, I should mention two that radically altered the way I view the world: The Trial by Franz Kafka and JG Ballard’s The Atrocity Exhibition.
15 - What would you like to do that you haven't yet done?
I should improve my terrible French both for myself and so I could some translation work.
16 - If you could pick any other occupation to attempt, what would it be? Or, alternately, what do you think you would have ended up doing had younot been a writer?
I do not make a living as a writer. I am trained as an archivist and currently work as a records manager. I was fortunate to find a profession that suits someone with a vaguely misanthropic streak; sometimes I prefer the records of people to people.
17 - What made you write, as opposed to doing something else?
A certain sense of loneliness. I grew up kind of isolated so I had to cultivate an inner life fairly quickly to stay occupied. I was always creative in some way, though as a boy I kept sketchbooks and thought I would do that. The switch to words came when I was about 15-16 years old.
18 - What was the last great book you read? What was the last great film?
I face lengthy commute to and from work every day, so I read a lot of novels (poetry is not conducive to the TTC) and I’ve had a pretty good run lately. Highlights after a day of pencil-pushing have included: Blindness by Jose Saramago, The Possibility of an Island by Michel Houellebecq, The Tenant by Roland Topor, Seven Japanese Tales by Junichiro Tanizaki and Memoirs of a Gnostic Dwarf by David Madsen. At the moment I’m 120 pages into Witold Gombrowicz’ enigmatic, terrifying and hilarious Ferdydurke and loving it.

As for films, I’d like to mention The Lives of Others, which won the foreign language Oscar last year over some good films, including Pan’s Labyrinth. That was very good, but for once the academy made the right choice. David Cronenberg’s Eastern Promises was fantastic and makes a neat companion piece to A History of Violence.
19 - What are you currently working on?
The final stages of Aesthetics Lesson in the summer were fairly intensive so I didn’t write much immediately after. I’ve only started to think about poems recently. I concentrated on reviews in the meantime.
12 or 20 questions archive
Posted by rob mclennan at 11:42 AM