12 or 20 questions: with Marilyn Dumont 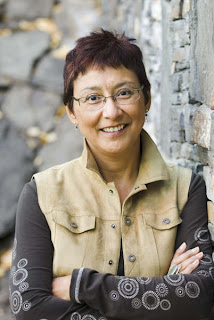 Marilyn Dumont, biography: Her first collection, A Really Good Brown Girl, won the 1997 Gerald Lampert Memorial Award presented by the League of Canadian Poets. This collection is now in its eleventh printing, and selections from it are widely anthologized in secondary and post-secondary literary texts. Her second collection, green girl dreams Mountains, won the 2001 Stephan G. Stephansson Award from the Writer’s Guild of Alberta. Marilyn has been the Writer-in-Residence at the universities of Alberta and Windsor, and at Grant MacEwan Community College in Edmonton and Massey College, University of Toronto. She teaches Creative Writing through Athabasca University and was a mentor for the 2006 Wired Writing Program - Banff Centre for the Arts. Marilyn continues to work on a fourth manuscript in which she explores Métis history, politics and identity through her ancestral figure, Gabriel Dumont.

My first book launched me into the publishing world and I was mostly prepared, but I later recognized that the book marketing world will do whatever it needs to attract attention to its product. If I had been more astute, I would have been more careful with promotional material that touted me as a descendant of Gabriel Dumont instead of focusing on my writing. It's taken me some time to promote my writing self, to reverse the presentation of self where I'm a writer first and a descendant second.

My first book made me a writer in a tangible way. This made me both ecstatic and fearful, but once I had completed the small festival circuit and realized the next year that someone else was "product," I was disillusioned and relieved. I could write in obscurity again. I have lived in Edmonton for approximately sixteen years. Edmonton is where I locate my familial and cultural history. Since one of my reasons for writing, originally, was to give voice to the struggles of my ancestors, my "race" has been central to my writing.

A poem begins for me from a variety of stimulus. It is often from reading, sometimes from music, a certain quality of light, a newspaper headline, from a poetry reading, a memory.

I never used to plan poetry collections around themes, but lately I'm doing that because my writing is informed by historical research.

Because I secretly wanted to be a dancer or a singer, readings satisfy that part of me which wants to perform. While crafting poetry, I make creative choices based on rhythm and sound, so reading is the culmination of that process.

Identity issues always intrigue me and I have felt, over the years, like the wasp or bee hovering over the sweet nectar of identity if there is such a static phenomena.

Working with an outside editor is critical to my work because IT is about process.

I am much more critical of my work now than when I started. I think that I'm critical to the point that it slows down my production, so it's more difficult to get books together.

Some of the best advice I've read is "The unconscious creates; the ego edits," Jane Hirshfield Nine Gates.

I don't have a writing schedule because I'm too busy trying to support myself with freelancing.

When my writing gets stalled, I read poetry, I read books on writing process, and I make things with my hands: quilting, beading, sewing, collage.

My most recent book is similar to my other two books in it's aboriginal content, but different in that I have gravitated to women's pov and female narrators.

Definitely, my work is influenced by nature because of my formative years growing up in logging camps along the foothills in Alberta. My strongest imagery is anchored in nature.

Writers which are important to my work are too many to mention, but a few are: Sharon Olds, Stephen Dunn, Joy Harjo, Lucille Clifton, and Louise Erdrich.

Something which I have done and which I'd like to do more of is write short fiction.

If I hadn't been a writer, I would like to have been a translator.

I began writing in a journal in my thirties and I wrote to keep myself sane. How am I doing so far?

The last great book I read was Istanbul by Orhan Pamuk.

I'm presently hoping for time to work on a collection loosely focused around Gabriel Dumont and the last days of the Riel Resistance. I'm also interested in writing about the aboriginal women in the early history of Edmonton.