12 or 20 questions: with Peter Culley 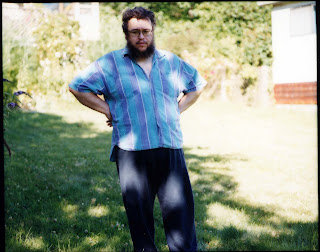 I thought the hard part was now over, and that a shelf of books would then pretty much write & publish themselves.

I've been in Nanaimo--except for some spells in the 8o's--since 1972. Geography--in the broadest possible sense--has always been a central concern of my work. As a teenager I knew about Paterson & The Maximus Poems so early on in my writing I knew that writing a town was an appropriate activity for a poet. And there were numerous local examples, from Daphne Marlatt's [see her 12 or 20 here] Steveston to Brian Fawcett's Cottonwood Canyon, from George Stanley's Terrace to Gerry Gilbert's Vancouver. Robert Smithson's Monuments of Passaic New Jersey was also crucial in helping me figure out that attending to the "local" could open a lot of unexpected things up.

Perhaps race and gender as aspects of class? I certainly strive to be aware at all times of my privileged position.

For a long time I would try and compose in my head not writing anything down until it was almost complete. I probably lost about twenty books that way--somehow I convinced myself that I had a wonderful memory. Since I got a little wiser to myself I proceed "serially" which just means coming to some sort of outside arrangement, like standing at the bus stop waiting for Totoro to show up. You just have to be a little patient.

Often a reading is the first place that I can see both what I'm doing over time in real time and how the reader might be brought along--you can learn a lot. The showbiz aspects I love, coming from a long line of cockney showboats.

My relationship with theory is a pretty mercenary one--if it helps me to work or understand things better I'll use it, whether I've fully absorbed it or not. Spicer's "radio" makes as much sense as anything else.

Rolf Maurer, my editor at New Star, is remarkably free of publisher/editor vanity, so his very occasional and poetry suggestions carry great weight. In prose a good editor is essential for everyone but very hard to find and an insufficiently honored calling. The world needs patient editors much more than it needs bright new talent.

The past two or three years have been the first of my life where I didn't feel completely blocked all the time. I think I just outlived my own preciousness.

Never touch 'em, but our yard has a decently fruiting if precarious old tree which I have saved from the axe.

"There's no such thing as an old kitten", spoken to me in a dream by George Jones. George Stanley once told me that you never make any money as a poet, but can usually count on at least one good dinner a year.

10 - How easy has it been for you to move between genres (poetry to critical work)? What do you see as the appeal?

It's easier now that I've let the boundaries slip a bit. And I've always liked the idea of having two mutually exclusive audiences, though that's not as true as it was.

I'm usually up very early surfing the web, keeping half an eye out for items for my weblog. I'll often start a piece of writing in our little shed in the back yard, away from the computer, stereo & TV. Lately I've taken to using green index cards

No one mentions liquor, coffee or drugs here, so I won't! Wallace Stevens or Sunflower Splendor can sometimes help get me "in the mood." A walk. A dictionary.

Unlike my other books, which were gathered over very long periods of time, The Age of Briggs & Stratton represents a continuous fairly short period of composition, and all the poems were published to my blog as I wrote them. I've been trying to make my writing simpler & cruder.

All of those things are certainly as or more important to my work as other writing.

Spend a winter north of the Arctic Circle, travel around the world on freighters & trains.

The all-night DJ on a 500 watt FM station. I did get to do that at Vancouver's CITR with Lary Bremner in the 8o's--one night we played Sandanista! all the way through...Night manager at a slightly rundown but respectable residential hotel.

I don't ever remember seriously entertaining the idea of any other kind of life. I've been very lucky.

Parkway, the third book of Hammertown. A big picture book on dogs.
12 or 20 questions archive
Posted by rob mclennan at 11:25 AM