12 or 20 questions: with Juliana Spahr 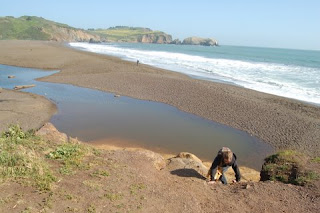 "When asked who her favorite poet might be, on most days this year she has answered Kamau Brathwaite. But in the last few months she has started to say Aimé Césaire some of the time. For many years the answer to this question was Theresa Hak Kyung Cha. And before that it was Gertrude Stein."

16 - What would you like to do that you haven't yet done?
Again, so endless. But when I think, oh answer the question, my first thought is to things like live in the desert for a long time. Or live on a small island in FSM for a long time. Or to move to Mexico for a long time.
17 - If you could pick any other occupation to attempt, what would it be? Or, alternately, what do you think you would have ended up doing had you not been a writer?
Today I'd like to be a botanist. A week of rain just ended and so it is moist and sunny outside the window and the plants are looking happy and I want to know them all more intimately.
If I had not been a writer I guess I would have been a secretary. I seemed to be heading that way until I got insane idea I should write things which I got because I went to this private college for rich kids where one could consider such follies.
18 - What made you write, as opposed to doing something else?
I think it has a lot to do with how that private college for rich kids didn't really offer any vocational training. So I took writing courses. And there was a really interesting poet there named Robert Kelly and he kept giving me books to read and I liked them.
19 - What was the last great book you read? What was the last great film?
I saw this film Bamako the other night that I loved. I think it will enter my list of all time favorite films.
My first thought about the last great book was to Peter Weiss's Aesthetics of Resistance. But again, there are so many.
20 - What are you currently working on?
Oh various things. I just wrote a long piece on Chillicothe, Ohio, where I grew up, that is also an essay on Hannah Weiner's "Radcliffe and Guatemala Women." And then I've been working with Stephanie Young to try and understand what is going on with gender in contemporary poetry. Our latest attempt was recently published in the Chicago Review and is available online at http://humanities.uchicago.edu/orgs/review/CR_532_Spahr_Young.pdf. And I am trying to talk Bill Luoma into making an API for me for a project I call Frogger which in my fantasy is a map interface that will allow people to post their memories, poems, and photographs of frogs before they disappear altogether because of the global massive die off of amphibians that is happening right now.
12 or 20 questions archive
Posted by rob mclennan at 10:21 AM