Ken Norris was born in New York City in 1951. He emigrated to Canada in the early seventies and quickly became one of Montreal's infamous Vehicule Poets. His work has been widely anthologized in Canada and in the English-speaking world, as well as published in translation in Quebec, France, Belgium, Israel and China. He now teaches Canadian literature and creative writing at the University of Maine. His selected poems, Hotel Montreal, is available from Talonbooks.
1. How did your first book change your life?

I always tell my creative writing students that a big dividing line is between unpublished and published authors. You can say you're a writer, but you really don't exist as a writer until you're published. So my first book made me feel real. Plus, in Montreal it gave me a sudden visibility, and I became friends with poets like Artie Gold and Endre Farkas.

There is, of course, the other big dividing line: Shakespeare, and everybody else.

I've been teaching in Maine for twenty-three years, but I don't really live in Maine. I tend to live everywhere else. I have one book ABOUT Maine--The Way Life Should Be--that I really had to tone down, lest I offend too many people.

Usually, geography has a huge impact on my work. There are the South Seas books, and the six or seven books with Asian settings that are starting to be published. In an Asian setting, or a South Seas setting, I come across as very Caucasian. Critics have always liked talking about my masculine identity or persona, not always the same thing.

3. Where does a poem usually begin for you? Are you an author of short pieces that end up combining into a larger project, or are you working on a "book" from the very beginning?

Ever since I started working with notebooks (around 1981) I would say that the unit of composition for me has been the book. The notebooks condense to form the book, but they create the shape of the book from the outset.
A poem usually begins for me with the nothingness, the empty space, of the blank page. I believe that if I concentrate deeply enough upon nothingness, upon blankness, something will emerge. I write, and am surprised by what I've written. The poem is hardly ever pre-thought, preconceived.

4. Are public readings part of or counter to your creative process?

I would say that for about twenty-five years public readings were a large part of my creative process, a large part of the revisionary process, really. In the past five years or so I'm not interested in readings at all. I rarely attend them, and I hardly ever do them. I've gone from being Walt Whitman to being Emily Dickinson.
I now think of myself as a poetry recluse.

No fixed or programmatic questions. But the poet is the best metaphysician that we have.

6. Do you find the process of working with an outside editor difficult or essential (or both)?

7. After having published more than a couple of titles over the years, do you find the process of book-making harder or easier?

The manuscript I just finished about three weeks ago was the hardest manuscript to write in the past twenty years. I worked on it for three years, and it never had a working title that managed to last longer than a week. So this manuscript probably had something like fifty different working titles. Until I wrote the last line of the last poem I didn't know what the title of the book was. Usually, I know the title of the book very early on.

Before working on this manuscript, I probably would have said that the process of book-making gets easier over time. Now I'm not so sure.

8. When was the last time you ate a pear?

This hasn't been a stellar summer for fruit for some reason. I had some really nice strawberries back in July. And some nice watermelon and pineapple when I was in Asia in August. I think the last time I ate a pear was the summer of 2006. I don't like pears very much, and it's hard to find a good one.

9. What is the best piece of advice you've heard (not necessarily given to you directly)?

As you may know, as a young writer I used to be involved in a lot of community activities: readings, publishing, etc.

Back in 1984, at Louis Dudek's retirement party from McGill, I was telling Leonard Cohen about my plan to inaugurate something I was calling The Montreal Review Of Books. Leonard gave me some great advice, in four words. He said, "Do your own work."
I think I was ready to hear that, and I took it to heart.

10. What kind of writing routine do you tend to keep, or do you even have one? How does a typical day (for you) begin?

I try to write two poems a day. Some days I forget. Some days I write seven poems. I have notebooks that are 144 pages, and I start a new notebook every three months.

There are no typical days. I used to write at night. Now I usually write in the morning. If I'm travelling, I write between one and four in the afternoon.

11. When your writing gets stalled, where do you turn or return for (for lack of a better word) inspiration?

When I'm working on a book I have two writers who I always consult. I have in my possession the books they wrote when they were my age. When I get stuck I read some of their poems from those books. It helps to get me focused.

12. How does your most recent book compare to your previous work? How does it feel different?

My most recent book is a book called Going Home. It is the first book in which I am really delving deeply into memory. In my fifties I'm finding that memory is a great resource. When you're younger you go more with the now than with the back then. Memory is becoming more and more important. It's a way of retrieving the world that you knew.

13. David W. McFadden once said that books come from books, but are there any other forms that influence your work, whether nature, music, science or visual art?

When I was in my early twenties I wrote a lot of record reviews. I think the art of the album has really influenced my sense of how you put a book together.

14. What other writers or writings are important for your work, or simply your life outside of your work?

Shakespeare, Wordsworth, Byron, Shelley, Keats might be influences most critics would miss, being focused on the modern and contemporary and Canadian. After the Romantics I get pretty disinterested in British poetry, and my allegiances shift.

15. What would you like to do that you haven't yet done?

16. If you could pick any other occupation to attempt, what would it be? Or, alternately, what do you think you would have ended up doing had you not been a writer?

In my early twenties I was a singer-songwriter, playing in a band and hanging around Tin Pan Alley. Had I not been so interested in poetry, I probably would have stuck with that.

17. What made you write, as opposed to doing something else?
I can't draw. And I have always liked the figurative in art.

The best read of the past ten years was reading all of Byron's Don Juan. I know it's a lousy movie, but I am quite partial to The Godfather, Part Three.

19. What are you currently working on?

I finished a manuscript in Macau three weeks ago, and am now about ten poems into a new book. It will take me three or four years to write the first draft. 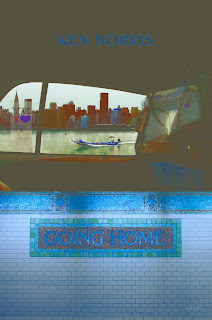