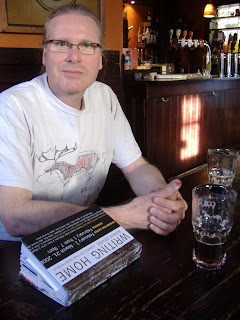 Joe Blades has been giving readings and publishing his poetry since 1980. He is a writer, artist, and publisher-president of the independent, literary publishing house Broken Jaw Press Inc. founded by him in 1983, plus he is on the editorial board of revue ellipse mag.

Blades was born in Halifax, NS, Canada. A graduate of the Nova Scotia College of Art and Design (BFA, 1988), he is also an alumni of the Banff Centre, Maritime Writers Workshop, Sage Hill Writing Experience, and the Simon Fraser University Book Publishing Immersion Workshop. He recently completed a Certificate in Film and Television offered by the NB Filmmakers’ Cooperative.

Based in Fredericton, New Brunswick since 1990, he grew up in Elmsdale, and Dartmouth, Nova Scotia. He has also lived and/or worked in Port Hawksbury and Halifax, NS; Toronto; Montreal; Banff, AB; New York; Senta, Serbia; and Pale, Republika Srpska. Blades has given readings, lectures, and workshops across Canada, in the eastern USA, Scotland and Eastern Europe.

Blades exhibits bookworks, photographs, and objet d’art primarily in Canada and Europe. Since 1995, he has been a community radio producer-host at CHSR 97.9 FM with the four-time Barry Award-winning Ashes, Paper & Beans: Fredericton’s Writing & Art Show.

In June 2007, Blades was elected to a second term as the NB & PEI Regional Representative on the National Council of The League of Canadian Poets. He is also an active member of the BlackTop MotorCycle Gang writers’ group in Fredericton.

Blades was curator of Videopoems: A Screening for the 2003 Tidal Wave Film Festival, and in various capacities and roles he has works on over 15 videos and films. He is the editor of ten books and chapbooks including Some Stuff on Canadian Spoken Word & Indie Publishing (NCRA/ANRÉC, 2004) and UGLY: an instant spoken word chapbook anthology (Broken Jaw Press, 2007.

1 _ How did your first book change your life?

It wasn't earth-shattering, but Cover Makes A Set (London, ON: SpareTime Editions, 1990) gave me a book and enabled me join the League of Canadian Poets as a full member and get funded readings—a big step towards feeling I could be a real writer earning my way.

I moved to Fredericton in 1990, but have been active here since 1988.
Geography and location, my location, has a role in my writing. Similar to a reporter, I've repeatedly found myself writing poems in the immediate as their story happens, unfolds around me. For example, that is how the TriBeCa (above/ground press, 1997) chapbook came to be written on the spot, in New York City, as well as my considerable output of "casemate poems" during the several short-term, very public artist residencies that I've been given.
Gender, race, and language do impact my writing though not always consciously. White, English-speaking male is not a unique starting point for a literary career. One has to move beyond that. I was truly amazed to hear a writer in Belgrade positively call my work emancipated and multiculturally inclusive. In my fiction, more so than poems, I have clearly female characters–narrators. One thing that's surprised me has been finding myself writing both poems and prose from the perspective of people in the former Yugoslavia—this after four trips and considerable time and activity there between 2004 and 2006. I don't know where that is going but it's definitely outside of my Canadian "cultural personality" self.

3 _ Where does a poem, piece of fiction or visual poem usually begin for you? Are you an author of short pieces that end up combining into a larger project, or are you working on a "book" from the very beginning?

Of course, there's no one answer to these questions. Most of my published books and chapbooks have been written in short intense bursts of writing. The focussed time results in poems that link together, forming a series or whole piece but I also write many one-off poems or prose fragments that can drift about seemingly independent of each other for years before coming together.

4 _ Are public readings part of or counter to your creative process?

Part of, for sure. Hearing other writers read their work, talk about their work and their concerns, has been active learning for me during the past almost 30 years.
Hearing myself read, and getting feedback, influences how and what I write and rewrite, even though I rarely perform as lively as I sometimes want.

5 _ Do you have any theoretical concerns behind your writing? What kinds of questions are you trying to answer with your work? What do you even think the current questions are?

Sometimes I really think there are theoretical concerns; other times sure there isn't one driving my poems. I know there's time when my stories, in whatever genre, have been driven by philosophical or psychological concerns.

6 _ Do you find the process of working with an outside editor difficult or essential (or both)?

Editors, active or passive, can always provide a challenge towards polishing a manuscript, especially when i don't get the outside input I sometimes want or need. I often feel that I don't have a good perspective on my creations and not sufficient enough a grasp on the work of other contemporary writers and artists. I haven't really had the challenge or opportunity to seriously wrestle my poems in their defence with an editor. Not having gone the academic writer route, I also haven't had that version of a strong exertive influence upon my writings.

7 _ After having published more than a couple of titles over the years, do you find the process of book-making harder or easier?

Harder, because of my experience as a book publisher trying to retail poetry books to "product" buyers, but, as my need to write isn't really controlled by money I keep writing, and as I like making books, they keep trying to happen so I need to keep trying to find them good homes. Having ideas is the easy part. Doing something with them and seeing them realized as a book or other art form is the challenge that can take many years.

Christmas 2007 at my parents' new-to-them house in West Chezzetcook, NS.

9 _ What is the best piece of advice you've heard (not necessarily given to you directly)?

I've too often heard, "write what you know", but I disagree with that advice. I prefer: "Start by writing what you know, even if that seems to be nothing, and let yourself be surprised." the other piece of advice that comes back to me is from one night, while employed at the B.S. Hotel, that my friend and co-worker Andrew Perry and me were talking on the Banff Ave bridge over the Bow River: he said, "Joe, don't ever lose your anger because that's the drive that makes you do things. I lost mine." By anger he meant the desire to create, to do, to change things from the existing, as if it was a charcoal one carries to light the next day's fire, to cook with, to heat and light one's way.

Other than photography, I am best set-up to write. The apartment's "livingroom" where I am replying to these questions is my workshop–studio. I have saws, hammers, metal- and leather-working tools and supplies here, my late grandfather Charlie's anvil, clamps, paint, brushes and bookbinding supplies too . . . but it also holds my bicycle and has the apartment's wall-to-wall carpet. Not the best situation for making mixed media work.
Prose essays are the hardest for me to start writing. Even when I can stand up and address a subject off the top of my head, I churn the material over and over for days–weeks in my head before committing it to paper. For writing fiction I need to start writing before doing anything else, and I really mean "anything"—not even making a cup of coffee, no email, no telephone. Once I’m into the writing I can make a coffee and stay on track and get anywhere from 700 to 1500 words in a sitting. My journal is my constant companion and it catches many of my poem ideas, turns of phrase, travelogue and the objects–artefacts of my days. Hand-binding books and art pieces often need a greater time-space than I feel I have available so my art has languished except for the "applied arts" of object-making and freelance design.

11 _ What kind of writing routine do you tend to keep, or do you even have one? How does a typical day (for you) begin?

When I can, I start writing soon as I wake up in the morning—before coffee or anything. That way there's no distractions or clutter. I have a journal with me all the time. I have an offline laptop in the studio that prefer using (checking my email is the worst way to start a day), have a manual typewriter I don't just use during artist residencies and school visits. If I keep it fed with paper I will write poems with it simply because it's there, waiting.

12 _ When your writing gets stalled, where do you turn or return for (for lack of a better word) inspiration?

Absurd or chance juxtaposition of words that create something new, is always a good trick as a starting place. When writing a poems sequence or. Of course, a change of scenery or location, travel by its very nature, makes me write to document and record, to observe the peeps around me.

13 _ How does your most recent book compare to your previous work? How does it feel different?

What is my most recent book: one published or one written? Casemate Poems (Collected) is an expanded collection from my earlier Casemate Poems (Waterloo: Widows & Orphans, 2004) and its Serbian edition Pesme iz kazamata (Belgrade: i.p. Rad, 2005) which though the wonder of translation led me into writing a "Prison Song" series of poems that's not yet published (except for some first drafts in a "24 Hour Zine Thing" challenge issue of New Muse of Contempt (2007).

14 _ David W. McFadden once said that books come from books, but are there any other forms that influence your work, whether nature, music, science or visual art?

Film and music definitely influence my work as do location and my environs—whether natural surroundings or a foreign city or bus. Some of my work is informed by philosophy or science, art making practices and the wide world of languages.
15 _ What other writers or writings are important for your work, or simply your life outside of your work?

16 _ What would you like to do that you haven't yet done?

Complete and publish a novel; to write and produce a feature film; a play; have at least one child; get to Dawson City, Prague, Iceland, Arizona, Andora, Argentina . . .

17 _ If you could pick any other occupation to attempt, what would it be? Or, alternately, what do you think you would have ended up doing had you not been a writer?

Well, I could have retired from the phone company by now, if I had stayed there. Could have been a chef.
Of late, my spectrum of arts-related volunteer work and paid employment includes considerable film work—much of it in the Art Department, especially set design and props (including the making of . . . "products" such as beer bottles & cans, cigarette packs, labels, documents, doctored photos, newspaper clippings, objects . . .) but also location scouting, publicity, boom operator, extra, etc.—on 12 mostly short film projects since last summer. Feel I will be doing considerably more work in this area.

18 _ What made you write, as opposed to doing something else?

I still do do other things :_) but when the words and images, the poems and stories come, I must write. I was always an avid reader, imaginative, observant . . . and able to write an image, or coin a phrase or pun on a dime and keep going.

20 _ What are you currently working on?