12 or 20 questions: with Stephen Morrissey 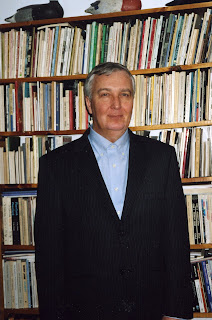 Morrissey also published two poetry magazines, what is (1973-1975) and The Montreal Journal of Poetics (1978-1985); in 2000, he and Carolyn Zonailo began Coracle Press, he continues to publish and edit chapbooks for the press. La béte mystique, (Les Editions Tryptyque, Montreal, 2004), is a French translation by Elizabeth Robert of Morrissey’s The Mystic Beast. Morrissey’s poetry has also been translated into French by Pierre DesRuisseaux and published in bilingual anthologies. Stephen Morrissey and Tom Konyves [see his 12 or 20 here] edited the anthology, The Vehicule Poets_Now (The Muses’ Company, Winnipeg, 2004).

Morrissey wrote and published on-line a comprehensive history of his family, Patrick Morrissy and Mary Phelan: Some of their Descendants and Relatives in Canada, beginning in 1837 when the family moved to Canada from Ireland, to the present day. He is the co-author with Carolyn Joyce of The Aquarian Symbols, The 360 Degrees of the Zodiac (Vancouver, Coracle Press, 2000).

Stephen Morrissey is a member of The Writers' Union of Canada, The League of Canadian Poets, and PEN Canada.

I was born in Montreal, a city with a long history of poets and artists. Irving Layton lived a few blocks from our home, and Louis Dudek’s book reviews were in the newspaper most weekends. F.R. Scott was well known as a poet but also as a champion of human rights. When I met the other Vehicule Poets in the early 1970s, I took for granted that I was a part of community of poets: We organized poetry readings, several of us became editors at Vehicule Press, and we respected each other. A friend from high school published a chapbook for me, Poems of a Period, in 1971 and then my first book, The Trees of Unknowing (Vehicule Press) was published in 1978. Louis Dudek wrote a short introduction to the book. I received letters, all very gracious and welcoming, from the older poets, including John Glassco and F.R. Scott. Poets in Montreal were working in a tradition of poetry; it was a part of our community, probably more so than anywhere else in Canada. My first book deepened and affirmed my work as a poet that I had begun when I was about fourteen or fifteen years old.

Montreal is Ville Marie, the City of Mary, a city of churches and spirituality and poetry. My family has lived here since 1845. Even if I were to live in Toronto or Vancouver—both wonderful cities—my consciousness, my history, my imagination, have been formed by living in Montreal. I am referring to how an apprehension of a specific place imbues one’s work with a personal mythology; that specific place represents something larger, it represents the human consciousness and the human condition.

I have always worked towards book length collections of poems. I used to run home for lunch when I was in high school and I’d listen to the Beatles’ Sgt. Pepper’s Lonely Hearts’ Club Band. That long-play album represented what I wanted to do in a book of poetry: It was to sustain a single concept throughout the length of the book. I also remember reading Walt Whitman’s Leaves of Grass and imagining all of my future work as a single continuum, a single vision of life.

A public reading is something poets do to get their work known a bit better, to promote a book, to promote themselves, or to be a part of a poetry community. The writing, the creative work, is done alone. Readings are the work you do because poets are expected to bring their work to the public.

All writers, all poets, have theoretical concerns. There has always been theory in literature just as there has always been criticism, going back to Plato and Aristotle. I don’t subscribe to any current theories of literature, but I am open to ideas from different theories. My theoretical concerns are as a poet-critic, influenced by Jungian psychology, and ideas from a New Critical “formalism.”

Some poets can edit their own work, others need someone to edit the work for them; every book is different. Carolyn Zonailo, who founded Caitlin Press in Vancouver, is both a brilliant poet and poetry editor. CZ has edited several of my books and I appreciate the work she has done for me.
7 - After having published more than a couple of titles over the years, do you find the process of book-making harder or easier?

There seems to be more to do as I get older and less time and energy in which to do it; a lot of things are harder as we get older because of this.

I remember eating pears at a cousin’s home on Railway Street in Woodstock, Ontario, where we used to visit many years ago. She had a tree with different types of pears grafted onto it behind her house. I always found that interesting, one tree but different types of pears growing on it. Amateur horticulturalists don’t do that type of thing anymore.

CZ gives me good advice all the time; she likes to quote the following: Regarding public events, Edward, The Prince of Wales, who later abdicated the thrown in the 1930s, said: “Never stand when you can sit. Never sit when you can lie down. Always use the facilities when you have an opportunity.”

This depends on my teaching schedule. If I’m not teaching, then I usually write in the morning. I write a diary entry every day, and have done so since January 14, 1965. I steal time from other activities so that I can get the work done.

If you are looking for something to do when you can’t write poems there is always translation. George Johnston, who was a friend for many years, told me that when he wasn’t writing poems he could always translate Icelandic Sagas into English. If I am not writing poems, I am always busy with something: writing book reviews and critical articles, writing letters, doing research, organizing papers, publishing chapbooks for Coracle Press, taking photographs, working on web site content, reading, and so on. There is always something to do, and I haven’t included family life and teaching in this. Eventually, if you’re patient, you will return to writing poems.

I have a completed manuscript, Girouard Avenue, waiting for me to find a publisher. While I’m still concerned with themes that are in my previous books, the new work is also concerned with geography/place, history, and Spirit.

Poets are fairly porous and many experiences influence them. My old friend Guy Birchard once told me that poets are always working, even when sitting looking out the window. I would add that while it is not done consciously, I am always alert for poetic material, for archetypes, associations, synchronistic experiences, and something meaningful and transformative in awareness; what ends up in a poem usually isn’t known in advance.

My reading is pretty much only poetry, biographies or autobiographies of poets, and books on poetics. Robert Lowell, Charles Olson, Allen Ginsberg, and W.C. Williams have all been important to me.

I have never really wanted to do anything in life but write poems. I was lucky to have found a teaching job back in 1976 and I’ve stayed with it and enjoyed teaching. Writing poetry is the activity that I have found most meaningful to my life.

Poets have two jobs: The job that pays the bills and the job of writing their poems. Other jobs I have done or could have done: I have done the inventory and archival work for CZ’s fifty-five boxes of literary papers held at Simon Fraser University and the two accruals of my own literary papers, about thirty boxes, including writing the inventory, held at the McLennan Library at McGill University. I have written poems since I was fourteen years old and I have taught since I was twenty-six year old. I am not temperamentally suited for a nine-to-five job.

What made me write goes back to a dream, from when I was quite young, that I have written about elsewhere (http://stephenmorrissey.ca/articles_reviews/SM_Mapping.html). I used to think everyone had similar life-changing dreams, but then I learned that they are quite rare. However, I listened to the dream and somehow I knew that it was an important message telling me that I had to record the events in my life or I would lose an essential part of my inner being. Because of the dream, I began keeping a diary; and then the dream also lead me to write poems, which I enjoyed doing because I liked being alone and I liked writing.

In the last month I’ve read The Poet’s Work (edited by Reginald Gibbons), a book that had sat unread on my bookshelf for the last fifteen years; I recommend it to every poet. Also James Schuyler’s Selected Poems, he is an excellent poet, recommended to me many years ago by Artie Gold. Last night I reread some poems by David Ignatow, and was reminded how much I enjoy his work. Earlier today I read some poems by Patrick Kavanagh, what a great poet! Two films that CZ and I watch at least once or twice a year are Howard’s End and A Passage to India.

In the last ten years, since Mapping the Soul, Selected Poems 1978-1998 (The Muses’ Company) was published, I have completed a manuscript, Girouard Avenue, as well as worked on other manuscripts of poems. I have written and published, on-line, my family history. This was an enormous task, requiring years of research and study and writing, and the work has deepened and informed the poems I am now working on. I believe in honouring the ancestors and this was my way to do this. The work of assembling the content for my website is the equivalent of writing and editing a book, and I was honoured that my son designed and put both the family history site and the poetry site online. In 2000, CZ and I began Coracle Press, which publishes on-line chapbooks; I believe it is important for poets to control something of the means of publishing their own work and the work of other poets.