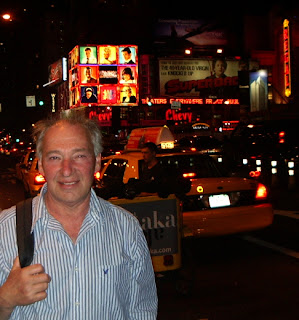 Tom Konyves was born on July 13, 1947 in Budapest, Hungary. He escaped with family after the October revolution and landed in Halifax in January, 1957. He lived in Montreal, went to Concordia University, lived in New York for a while.

His books of poetry include No Parking, Poetry in Performance, Ex Perimeter and Sleepwalking Among the Camels: Selected Poems.

In 1978, coined the term “videopoetry”, a genre he pioneered as a member of the Montreal avant-garde group, the Vehicule Poets. His first videopoem was Sympathies of War, using slides, live performance and typed text on the screen. His most recent videopoem is Poem for the Rivers Project, a collaboration with his son, Alexander. Videopoems 1978-2004, is available on DVD (AM Productions, 2004).

He initiated public poetry projects, such as Poesie En Mouvement (Poetry on the Buses 1979) and The Great Canadian Poetry Machine (Expo 86), curated Montreal’s first Concrete Poetry Exhibition (Vehicule Art, 1980) and gave numerous poetry performances, including In A Station of the Metro by Ezra Pound (1979) and Marie the Poem (1981). He wrote and performed Drummer Boy Raga: Red Light, Green Light (1979) a collaboration with most of the Vehicule Poets.

He left Montreal for Marlene, and Vancouver, in 1983. He started up a video production facility, wrote and produced numerous TV programs, including the widely-broadcast documentary, To Return: The John Walkus Story (Global Totem Pictures, 2000). He now teaches Screenwriting 111 and Word and Image 165, a creative visual writing course at UCFV in Abbotsford, BC.

The first book, No Parking, was a passport to a certain City of poetry, call it Avant Garde or Experimental Poetry; in my case it was Dada-Surrealist – a passport which entitled me to walk through walls – narrative-emotional-political-nostalgic-domestic, even formalist walls (I kind of fancied myself as a formalist). The freedom I enjoyed, wandering through the streets paved with the stones of old Montreal (well, at least the sidewalk turning the corner at St. Urbain), led me to work in other media, videopoetry and performance poetry. By the time I realized what I was doing, it was too late to have second thoughts. I was led down the path and set free.

I lived in Vancouver from 83-88, when we moved south to White Rock, near Crescent Beach. Many poems found it difficult to survive the long wet winters without sun; and of course, on the day that the sun did emerge, the poems were thrown in the back seat and off we flew to the soccer pitch. Race and gender have not.

Every poem has its own unique beginning. As some events demand a poem to mark their passing, I have written the “occasional” poem. I collect poems for a book by stuffing them into a large manila envelope until they all reach a certain “maturity”.

Hearing a poem is not like reading a poem in a book; there’s a wonderful sense of freedom the moment a poem is launched into the air, the freedom to decide when to hover over words and when to rattle them off the tongue, to stress or not to stress, to tilt the lines in the “westcoast” way, with a curl at the end, or read in a monotone to remove any trace of colour and intent – the reading/performance of the poem demands the writing breathe and skip from beginning to end.

I would like to think that there exists a poetic state to which a poem aspires, an altered state of consciousness, a state altered by the poet’s ability to manipulate the form. I’m always after new forms for poems. I enjoy seeing a poem reflect simultaneity (the poem becomes multi-directional, multi-layered) and the process of thought (when the poem includes disruptive elements).

I find the inside editor difficult enough.

I know, I know. Plenty of fruits and vegetables. The last pear I ate was probably in July. I prefer peaches from the Okanogan Valley, there’s even a place there called Peachland.

Patience in publishing is also a virtue, as in: “This book shall not be published integrally until the author has acquired sufficient experience to savor all its beauties in full.” – Alfred Jarry, Exploits and Opinions of Dr. Faustroll, Pataphysician.

10 - How easy has it been for you to move between genres (poetry to film)? What do you see as the appeal?

I am inspired by images, imagined or seen, by sounds, heard or remembered, by language, printed or in my mind. When I turn to the printed page to express the poem of these inspirations, the “translation” become words on a printed page.

When I turn to video to express the poem, it’s the brewer facing his cauldron: I add words, considering their appearance, positioning and duration; in judicious amounts, I add images and sounds. The process is also a reaching out for the image, or the word, or the sound, juxtaposing the three in a creative act of… juggling. It’s the rotation of appearances and reappearances at an even pace, or hurling one to suspend it longer in the mind’s eye (or ear). There is a time to turn my back on the audience, to lull them into a trance, to leap and chase the fiery wands, to mystify and confuse, but most all, to surprise. Mostly I enjoy the simultaneous presentation of words, images and sounds, and the ability to manipulate the viewer’s experience using all three of these elements – instead of just one.

I have no routine for writing. I do walk down to the beach here almost every day, and I have a Moleskin notebook and a fountain pen in my backpack, just in case. A typical day for me begins with an alarm.

Ah, the writer’s block. I once wrote a series of poems, Ten Poems Around the Block, which enabled me to nullify the ‘block’ with a single play on words. My latest block was addressed by writing haiku poems (23 Skidoo). For me, it’s finding a new form which releases the creative flow.

My most recent book, O.O.S.O.O.M. (Out of Sight Out of Mind), is a surrealist novella, a series of prose pieces written in the late 70’s which I found only a couple of years ago. Compared to my previous work, it’s all in prose and there is a thread of narrative from beginning to end. There is also a sense of free use of the narrative form and it’s amazing to me that I was able to sustain it for as long as I did.

Books could be one of my influences but I wonder what has not influenced me; after all, I respond to so many stimuli it’s hard to say where the influence stems from. For example, I see nature and visual art at opposite poles of perception yet both continue to influence my approach to my work, whether it’s seeing the repeated swell of waves from the shore or the gesture of a figure in a Picasso painting; I am moved, and perhaps I will respond with a repeated swell phrase or an elaborate gesture of my own.

Once upon a time, I enjoyed reading the Romantic poets, especially Keats. Then I discovered Blake who opened wide the window of my imagination. My youth was all Jarry, who threw me for a loop; I recovered with the help of Breton, Picabia and Tristan Tzara. Rimbaud brought tears to my eyes, Eliot straightened me out, Gertrude Stein urged me to repeat myself; Joyce threw me over the falls, Beckett and Kafka made me appreciate my absurdities, Ginsberg opened my mouth, Simic confirmed my lines were authentic at a time when I needed it most. Roth humbled me with his technique, and Saramago put magic back into my world. And, of course, it was my real life friend, Ken Norris, and the rest of the Vehicule gang, who helped me celebrate the joy of being a poet.

I would be a carney.

The women. From beauty to beauty.

A new book of poems, Perfect Answers to Silent Questions.